Marriages Made in India 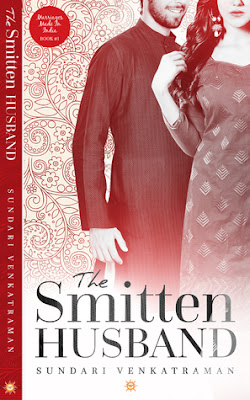 Blurb
Ram Maheshwari is a successful jewellery designer who has a huge showroom on MI Road, Jaipur. He’s tall, dark, handsome and a billionaire to boot. He’s twenty-nine and falls in with his parents’ wishes when they try to arrange his marriage.
The lovely, stormy-eyed Sapna Purohit is from Pushkar. She’s managed to finish school and makes a living by doing mehendi designs during weddings. She’s always dreamt of a Prince on a white horse, sweeping her off her feet.
One look into Sapna’s grey eyes and Ram is lost. Only, Sapna’s unable to see her Prince in Ram. Being from a poor family, she has no choice but to go along with the tide when the Maheshwaris offer to bear all expenses of the wedding.
Does that mean that the feisty Sapna is all set to accept Ram as her husband? She puts forth a condition, after the wedding. Will The Smitten Husband agree to it?
*MARRIAGES MADE IN INDIA is a five-novella series that revolves around the characters you have met in The Runaway Bridegroom.
Read an excerpt…
“Good morning!” said a sleepy voice. “What are you doing so far away?” called out Ram, before reaching out with a long arm to pull her to him.
A startled Sapna gave him a shocked look that was lost on her husband, whose eyes were still closed. His arms went around her waist like steel bands, his breath hot against her cheek. “Sapna…” he whispered in her ear as his hard lips pressed into her petal soft cheek.
Sapna tried to pull out of his arms, only to have them pull her closer. Her breasts were flattened against his solid chest. Her traitorous body seemed to enjoy the pressure as her nipples perked up. She did her best to hold on to the control that was slipping fast.
“Ram,” she called out loudly, hoping to wake him up. She couldn’t free her arms that were trapped against her own body, as he held her in a crushing grip. His mouth was busy exploring her face, moving inexorably towards her lips. His eyes continued to remain closed, while his hands moved restlessly at her waist. “Ram…” her voice came out in a whisper, as she felt his tongue trace the edge of her lips. Tortured, she made the final move to capture his roving lips, breaking free her hands to hold his face steady.
“Sapna…” sighed Ram, kissing her gently, his tongue first tracing her upper lip and then her lower one. He gently bit the luscious curve. Sapna instinctively opened her mouth to let him explore the velvety cavern with his tongue. Shyly, her tongue reached out to mate with his, making Ram groan with need.
His hands moved restlessly on her body, her nightie bunching up. His muscular legs tangled with her slim ones, making her sigh with pleasure as his hard and hairy skin brushed against her soft and silky one. His hands cupped her lush bottom, caressing it lovingly.
Sapna suddenly became aware of his hardness pressed against her belly. Coming to her senses, she turned her face away, breaking the kiss. “No Ram.”
His wet lips continued to caress her, his tongue exploring her shell-like ear. Even as her heart thudded loudly, Sapna pushed against him. “Ram, please, will you stop it?”
His black eyes opened a slit, desire and slumber at war in them. “Sapna?” If he hadn’t been fully awake before, he was now, as he stared at her lovely face that was so close to his. He slowly recalled what had been occurring over the past few minutes. He had at first thought he was dreaming about kissing the luscious woman in his arms. How had she landed there in the first place?
Grab Your Copy
Amazon.com | Amazon.in | Amazon.co.uk | Amazon.com.au | Amazon.ca
#TSH #1 Bestseller on Amazon.in 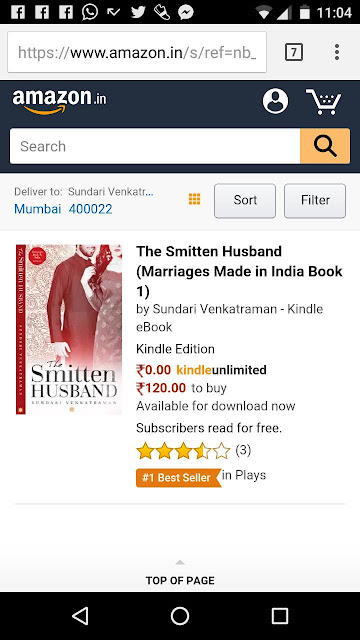 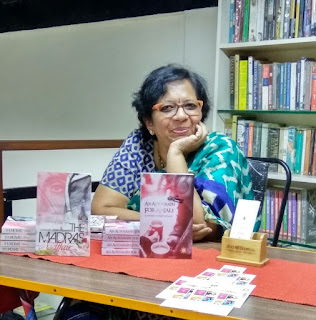 The Smitten Husband is the eighth book authored by Sundari Venkatraman. This is a hot romance and is Book #1 of the 5-novella series titled Marriages Made in India. Other published novels by the author are The Malhotra Bride, Meghna, The Runaway Bridegroom, The Madras Affair and An Autograph for Anjali—all romances. She also has a collection of romantic short stories called Matches Made in Heaven; and a collection of human interest stories called Tales of Sunshine. All of Sundari Venkatraman’s books have been on Amazon Top 100 Bestsellers in India, USA, UK & Australia many times over.


Play the game of  #Rafflecopter

Other Books By Sundari Venkatraman 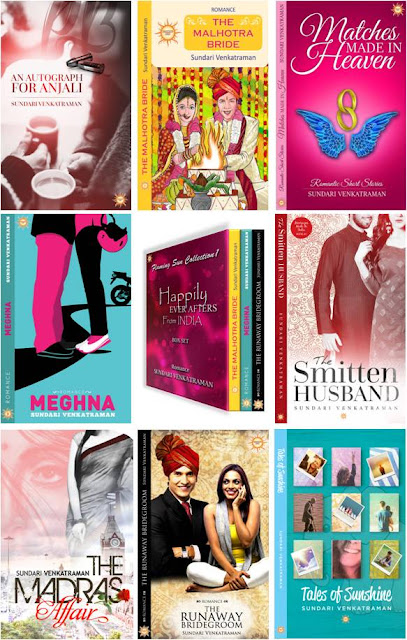 Spotlight: The Doppelganger by Ruchira Khanna