Life has its own strange yet unique ways. On some days it will shower you with praises and on some days it will bring you down with all the negativity surrounding you, thereby leading to an increase in frustration levels among us. But when, those frustration and built up anger within you rises to a point where you cannot bear it anymore, you try to break free from such emotions.
In Taandav, which is a short film of just 11 minutes, director Devashish Makhija has beautifully captured this essence to break free from your stress and worries. Produced by Muvizz.com, this short film stars ace and renowned actor Manoj Bajpayee in a lead role. 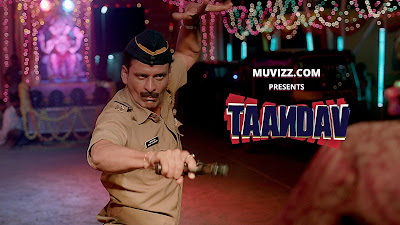 Taandav revolves around a Head police constable, Tamble played by Manoj Bajpayee who is going through a rough phase in his life. His daughter and his wife, both of them are a bit pissed off with him. His daughter wants to go to a private school. But, the school management asks for a huge amount in form of donation which he cannot afford. This, in turn pisses his wife off and the daughter.
The offspring of ‘honesty as a virtue’, Tamble refuses to distribute a huge amount of cash recovered from a police raid among himself and his colleagues who were present at the raid. He does so, in spite of knowing his poor financial condition and giving a golden chance of having her daughter study in a private school a miss.
Tamble happens to be on a patrol during  Ganesh Visarjan and this his where his mind meanders to the above thoughts. Suddenly a quarrel erupts between two people amidst all the din and they approach him for a settlement. Instead of settling the argument, he takes his gun out and asks them to dance to the tunes. Shortly, he himself joins to the party and performs a taandav. This is without any doubt, the best few minutes of the film.
The direction is spot on as it brings out a lot of emotions without having to say much. The way in which Devashish Makhija has brought out such diverse emotions within a short span of 11 minutes is superb and commendable. It probably shows what story-telling is all about.
Manoj Bajpayee, as usual steals the show from the word go.
Moreover, the soundtrack by Nucleya adds a punch to this tiny pocket bomb called Tandaav.
The movie depicts the struggle of an aam-aadmi and how breaking free from the shackles of stress is important. In this film, Tamble breaks free from the stress, frustration and all the negativity by performing a Taandav that destructs the negativity around him.
In case, you haven’t watched this tiny pocket bomb yet, you can do so now! Simply click on the below given video and enjoy!