So today is the first Monday of the year 2016. Most of us must be back to work after a 3 or 4 days of relaxing with family and friends, welcoming the new year in style. Well, to be honest, the ‘most’ does not include me. I rather had a tensed last day of the previous year, with the kiddo running high fever, which was a first. Thus, resulting in spending a sleepless night and welcoming the new year with a bit worried face.
Having said that, later on, when things were fine,  I just pondered upon the word ‘worry’ and realized that more often than not, we worry because we fear. We fear that something worse is going to happen. Or we fear of the consequences of our actions and reactions.
So what leads to fear?
Fear in ourselves erupt because …
1) We stop thinking. Add to that, we stop thinking positive. We tend to think negative at first, in most of the situations, which leads to creating a mindset that refuses to think positive. Thus, resulting in building fear within us.
For eg: If you are going to meet a client which can be a breaking point in your career if you nail it, you need to stay focused, positive and away from negativity. If you have done that, there are least chances of fear grappling your nerves and resulting into a poor show during the meet.
2) When we fear of the consequences of our actions and reactions, we don’t really fear for what is going to happen. But, we fear for what has happened and what will be repercussions of the same. That cannot be counted as fear, as it is your actions or reactions to a particular situation. So if you had acted wisely, the situation would not have cropped up at all.
For eg: I had called my kiddo’s pediatrician who was partying and still gave me a ear. I gave him a brief about my child’s health and his condition at the moment. He advised a syrup which we promptly gave. As soon as he took the syrup, he puked. At that time, had I panicked and called the pediatrician, I would have created a panic situation for all of us. We simply comforted the wailing kiddo, did what pleased him and kept a check on the temperature. The next morning, things got better when we met the pediatrician.
So give time to your worries and stay calm. More often than not, time eases out all the worries. Even if it doesn’t, wear a smile on your face and kick all those worries which instills fear in you. So today, on the first Monday of the new year, kick out all your fears and go with enthusiasm on your face. 9 out of 10 times, you will have a peaceful, productive and not a khooni Monday. 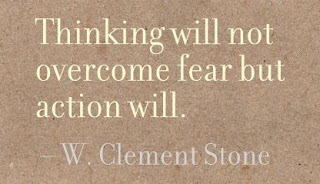 This post is a part of the January blogathon hosted by #kowthas and today’s prompt is: Motivation Monday – What is your motivating mantra on the 1st working day of the year

A Note of Thank You