Tornado Giveaway 2: Book 82 – The Arithmetic of Breasts by Rochelle Potkar

Go to Book No. 81
Check all the Books Here 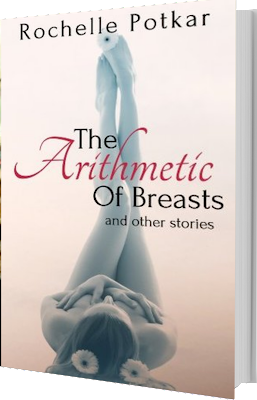 Name of the Book: THE ARITHMETIC OF BREASTS AND OTHER STORIES
Author: Rochelle Potkar

This cluster of 7½ literary short stories presents to you the romantic-sexual facets of:
Narain who lusts for Munika, hypnotized by her bosom in The Arithmetic of Breasts, and old Jaganlal who wants a favour from young Dia in The Room with a Sea-view.
Jackie who is in love with Nic in Sky Park, and the surgeon in Dr. Love who is changing much more than Sneha’s hairline, nose, lip and chin.
Shonali and Neel who are realizing that infidelity might not be such an easy thing in The Scent of a Conscience, and a woman who walks the tight rope between tradition and sexual exploitation in A place they call Scary.
And, Sunil who meets the woman of his desires in What Men Want through an adult dating site.
Through these stories, Rochelle Potkar explores the intensely personal ‘unrelationship’ that exists alongside its conventional and socially articulate twin, the relationship.
You can also buy @ 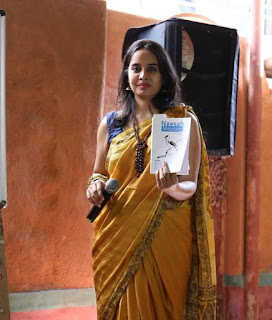 She won a gold place for her story, ‘The point of Irish coffee’ from Revenge Ink, and an Editor’s choice award for her story, ‘Ramayan redux’ by Triangulation: Parch, USA.

Her poems have appeared in The Brown Boat, The Finger Magazine, Haibun Today, The Bamboo Hut, The Freshwater review. Her poem, ‘Knotted inside me’ was one of the eight shortlisted poems for The RaedLeaf Poetry India Award 2013. She won a second place for her poem ‘Swing’ at the Wordweavers contest 2014.

Her first book of stories, ‘The Arithmetic of breasts and other stories’ was shortlisted for The Digital Book of the Year Award 2014, by Publishing Next. Her next book, ‘Dreams of Déjà vu’ is a speculative novel.

Born in small town Kalyan, Rochelle craved big city only to realize that Bombay was a small town in a large world. She now waits for the galaxy to become a small town.

She is the co-editor of the quarterly Neesah Magazine with Nivedita of Nivasini Publishers, Hyderabad.

Stalk her @
Website | Twitter | Facebook
Go to Book No. 83
Now for the Rafflecopter: Gather as many points as you want to. The more points you get, the more you have a chance to win it all. Show your love for books.. Tweet, Like and Spread the Word… Thank you for being a Reader… You keep the Authors motivated… This is our way of saying a Thank you 🙂