Tornado Giveaway 2: Book 39 – Shikhandi and Other Stories They Don’t Tell You

Go to Book No. 38
Check all the Books Here

Name of the Book: SHIKHANDI AND OTHER STORIES THEY DON’T TELL YOU
Author: Devdutt Pattanaik

Patriarchy establishes men as superior to women.
Feminism views women and men as equal.
Queerness questions what constitutes male and female.
Queerness isn’t only modern, Western or sexual, says mythologist Devdutt Pattanaik. Take a close look at the vast written and oral traditions in Hinduism, some over two thousand years old, and you will find many overlooked tales, such as those of Shikhandi, who became a man to satisfy her wife; Mahadeva, who became a woman to deliver his devotee’s child; Chudala, who became a man to enlighten her husband; Samavan, who became the wife of his male friend; and many more . . .
Playful and touching—and sometimes disturbing—these stories, when compared with their Mesopotamian, Greek, Chinese and Biblical counterparts, reveal the unique Indian way of making sense of queerness.
You can also buy @ 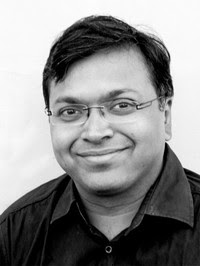 Devdutt Pattanaik
Dr. Devdutt Pattanaik (born December 11, 1970) is an Indian physician turned leadership consultant, mythologist and author whose works focus largely on the areas of myth, mythology, and also management. He has written a number of books related to Hindu mythology, including Myth = Mithya: A Handbook of Hindu Mythology, a novel, The Pregnant King, and Jaya: An Illustrated Retelling of the Mahabharata (2010).

He is the Chief Belief Officer of Future Group, one of India’s largest retailers, bringing the wisdom of Indian mythology into Indian business, especifically in human resource management. He also writes a column for the newspaper MID DAY.

He has also written a novel based on a tale from the Mahabharata titled ‘The Pregnant King’ published by Penguin Books India.

Stalk him @
Website | Twitter | Facebook
Go to Book No. 40
Now for the Rafflecopter: Gather as many points as you want to. The more points you get, the more you have a chance to win it all. Show your love for books.. Tweet, Like and Spread the Word… Thank you for being a Reader… You keep the Authors motivated… This is our way of saying a Thank you 🙂

The First Life of Vikram Roy by Laxmi Hariharan