Go to Book No. 25
Check all the Books Here 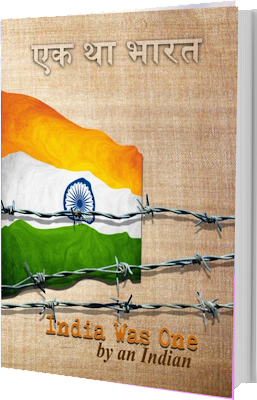 Name of the Book : INDIA WAS ONE
Author: An Indian

…Suddenly, he saw something shiny at the bottom of the abyss. He squinted his eyes to see what it was. He ran back to his binoculars and turned them to see what it was. Sharp barbed wires that separated the two mountains came into focus. He had come as far as he could in his country. But she was standing in another country.
He was in South India and she was in North India…
Have you ever imagined India being divided into two countries? What happens to the millions of Indians who are from South India but are now residing in North India? Kaahi & Jai were two such people who got trapped in this situation. Everything was going smoothly for them and suddenly, their world turned upside down.
How will they get together? Will India become one again?
Take an exciting journey with them from their college days in Mumbai to their life in the US and back to India when they find out that India is divided.
You can also buy @ 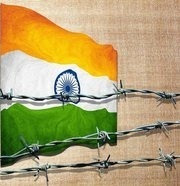 The Author calls himself An Indian. We have no pics of him. But the Author does have something to say to every Indian out there….

I wanted to tell a story peppering it with Indian languages and narrating my experiences, inter-weaving them with some imaginary tale. When I mentioned this idea to my wife, her very first question was, “who is your target-audience?” That made me “think outside the box”. After reading the book, you’ll agree that there is no target-audience. I’d say – 10+, any sex, from any country, any ethnicity, any religion – is the intended audience.

When I wanted to tell a story, I wanted to “lull” the reader into thinking that they are just reading a travelogue. Making them wonder where (if at all anywhere) the story is going. Is it just another boring experience written by a NRI? AND THEN BOOM. It hits you. Suddenly, along with the characters, the reader’s dream-world shatters.

This book is broken up in 3 parts. And it is intentional. Let me explain why.

The first part is about the Indian culture. Most Indians (in India) already know it. But what about NRIs? They may find it nostalgic. And what about their kids. They may have a better understanding about their roots and culture. And the non-Indian find it very fascinating.

The second part is about life in the US. Readers who are in the US may find it a bit like a travelogue. However, others may find it very interesting. Those who can’t be here get a glimpse into the US life of an Indian (and the US life in general).

The third part is for everyone.

Hence, you’ll notice that different people react differently to this book. There is something for everyone.

I hope this helps you.

Thank you,
An Indian

The author was born and raised in Mumbai, India. He came to the US in 1989 and lived in New York. This book is for those who like travel, history, romance, culture, cuisine, sports, political-thriller, etc. It’s dubbed as a realistic-fiction. A fiction based on some real events.  He currently resides in Los Angeles with his wife and two children.

Stalk him @
Website | Twitter | Facebook
Go to Book No. 27
Now for the Rafflecopter: Gather as many points as you want to. The more points you get, the more you have a chance to win it all. Show your love for books.. Tweet, Like and Spread the Word… Thank you for being a Reader… You keep the Authors motivated… This is our way of saying a Thank you 🙂

Tornado Giveaway 2: Book 48 – The Activist and The Capitalist by Vibha Batra