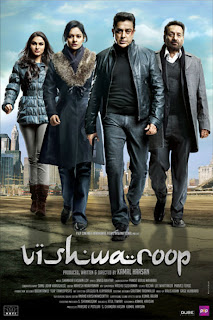 So Vishwaroop did happen yesterday afternoon when we had nothing to do. Yes! Nothing! (There are times in life when the dreaded three letter word takes a back seat and things like Vishwroop happens). So we landed at the multiplex, he cribbed before buying tickets at such exorbitant price (We usually go for movies on Tuesdays – Thanks to Vodafone), made some faces and reluctantly bought the tickets. Since it was time for the movie we decided to troll the mall adjoining the multiplex, glanced through the collections at various stores with an eye on the watch. Few minutes later, we entered the cinema hall with a packet of samosas, a coke and popcorn.
And the first scene itself made us laugh, laugh for the very same word, act that made us watch Vishwaroop aka SEX. I say it was an epic facepalm moment. The next frame was Kamal Hassan practicing rather teaching his Kathak dance moves with/to his students. It was one helluva of a song which seems to never end, showcasing the dance prowess of Kamal Hassan. But the way he plays the role of a soft teacher, with lots of control and precision is something that I liked.
Then there is his wife who for once seemed to be a poster girl for Playboy with figure hugging clothes and nighties revealing huge bosom. (So, it’s obvious that his eyes were glued to the screen) and hence it is better I continue with the review, not allowing her to occupy too much of your mind space. Oh yeah, important information: She has a PHD in some stupid thing and is Employed!! (When will God answer my prayers?) Working at some nuclear research centre. His boss is completely flat over her looks, dreams of sleeping with her but she later comes to know that he is a crook, bad man, eventually leading her and Kamal Hassan getting kidnapped.
The story till here is bearable to say the least. But then suddenly it takes off in a jiffy and BOOM. What do you see?? A completely strong macho man taking on the kidnappers and within a minute all the 10-12 bad asses are killed. That made my eyes pop out and mouth left wide open. A good twist I must say. Salman Khan, you need to catch up, I say and that too ASAP.
The film then takes us to the terror camps in Afghanistan showcasing how the training is conducted, how they keep themselves motivated, how to concentrate on the mission and the aim of their lives. But you definitely need a translator when a Hindi film suddenly turns Arabic so that you can write this portion of the review in a much better way. (Fact: Even Kamal Hasan faced similar problem.) This is the most intriguing part of the film which kept me interested and hooked to the seat. (2 missed calls, 27 unread Whatsapp messages from 5 contacts). Probably a true picture of how a terrorist training camp is held.
Rahul Bose who plays the lead bad man has a notorious plan and wants to see it executed. But all I want to know is why the hell is he talking under the tone of Himesh Reshamiya?? Imagine a person talking in that tone for more than 10 mins and suddenly A. R. Rahman sounds Himesh Reshamiya. (Bright minds, please answer). A NATO strike takes place on the training camp but somehow Kamal Hassan, Rahul Bose and few of his mates escapes alive. No. There is nothing strange in it. If they die then who will tell the climax? Huh?
No surprises here. A nuclear bomb that was planned to explode with remote control was stopped at the last minute by Kamal Hassan, his wife and NYPD. Simple. No complications. And there was a glimpse of some kissing and hugging between Kamal Hassan and his wife as Rahul Bose planned an escape in an aircraft. So hero alive. Villain alive. Brace up yourself for Vishwaroop 2.
Statutory Warning:
My rating: 2.75/5 (Go without any opinions and enjoy Kamal Hassan.)

Barfi – A treat to watch