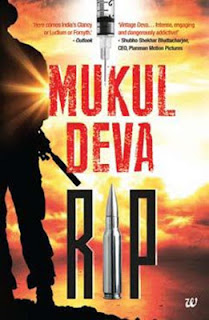 Written by: Mukul Deva
Published by: Westland Ltd
ISBN: 978-93-82618-19-5
Genre: Fiction/Thriller
No. of pages: 286
Price: 200 INR
Synopsis: Colonel Krishna Athwale and his team of Special Forces officers known as The K-Team rally to protect the country from the enemy within. And no one is safe from their deadly intent. Hellbent on stopping them is Raghav Bhagat, rouge para commando, gun for hire and Krishna’s bete noir. Caught in the crossfire are Vinod Bedi, Special Director, CBI, a news anchor named Reena Bhagat and two young boys Sachin and Azaan.
Plot:

“You can smell the gunpowder. Such is the power of words of Deva.” – The Hindu

When you read such kind of praises from organisations and people for the book, the expectations increases by leaps and bounds and this book lives up to the expectations build around it. The plot starts with introducing some members of the K-Team, all ex servants of military forces, planning to carry out an assassination of a corrupt politician. They planned to carry out similar strikes divided in the group of two from Patna to Chennai and to Pune simultaneously. It is a straight and a direct attack against the political class leading to shock and panic. Not only this, the K-Team also gives hints of their next targets asking the government to take them seriously and meet their demands. The government as a result appoints equally strong and powerful forces to solve this K-Team problem and protect the target from being eliminated. Also, the author has weaved a beautiful love story revolving around the main characters. So what happens next? Will the K-Team succeed? Or will the government crack down the K-Team? – is explained in further pages.
. Writing: All the characters are named very smartly as well as very well etched. One can easily draw the parallel from real life. Hence the author very smartly stresses on the fact that this book is a complete work of fiction and any resemblance to any person, party or organisation is purely coincidental and fictitious. The events that take place are similar to the ones that have taken place in reality. Like the airplane hijack and the various scams that is still rocking the nation. The writing is simple and easy to understand. Also there is use of expletives and abusive language
Overall: This book is one of the most relevant books in today’s times. The book depicts what the people of the nation is feeling with the blatant corruption, scams erupting day in and out; the mood of the nation and what solution is in sight as the author himself says:

“This book was born out of extreme anger and shame. Anger at the appalling, naked greed so shamelessly displayed by the Indian political class. And shame that they happen to be fellow Indians.”

When I first read the book, I felt the storyline is somewhat similar to the movie Rang de Basanti and A Wednesday but overall I completely enjoyed the book for an edge of the seat thriller with striking similarities in real life. I recommend this book to each and everyone whether they follow the thriller genre or not. A thriller, entertainer not to be missed!

This review is a part of the biggest Book Reviews Program. for Indian Bloggers. Participate now to get free books!