This post has been published by me as a part of the Blog-a-Ton 32; the thirty-second edition of the online marathon of Bloggers; where we decide and we write. To be part of the next edition, visit and start following Blog-a-Ton. The theme for the month is ‘An Untold Story’

Tanay had left very early in the morning for his office. It was just 6.30 am. On other days he leaves at 9 am but today was something special. Today was the result of the performance evaluation which had happened last week. He was very upbeat as he had a strong gutfeeling of his elevation from Asst.Manager to General Manager.
The alarm rang sharp at 5.30 in the morning. After putting the alarm off he went close to his wife and cuddled her. His lips were against her, murmuring through her ears, sliding his hands through her thighs, he kissed and kissed.
Tanay bid her goodbye with a tight hug along with a smile and left for the office. Before reaching the office he took a small halt at a nearby temple to pray to the Lord and spend few minutes of peace and gear himself for the stressful day at work.
On setting to drive again, he received a sms from his wife mentioning how she misses and waits for him to arrive in the eve and take her in his arms and never end loving her. He smiled at reading the sms and sent a reply to her saying “Wait for tonight. It will be as special as our first night.”
With a big smile on his face he started to drive again. Tanay was more than 100 percent sure of his promotion to the GM post and thus had planned to surprise her wife and make it special for them. He was just waiting for the official confirmation of his promotion. And within an hour he reached his office.
The office was very active and buzzing with theories of promotion – who will get promoted and who will not. He went straight to his desk, ignoring all the calls and shouts from other employees to engage himself with the grapevine. He opened his inbox and was delighted to see a mail from the HR Head of the company. The mail communicated the much anticipated and much deserved promotion to the post of General Manager. He was thrilled and excited about his promotion. He broke this news to the near and dear ones but asked them to not to tell his wife as a part of surprise and they obliged. Congratulatory messages poured in from everywhere.
He had everything planned before hand to surprise his wife and have a good time together. So swiftly he selected few of their photographs and sends it to the photo studio for creating a huge photo frame of various memories shared together. Then he called a florist and asked the fellow to deliver a bouquet at his residence every hour starting from 1 pm till 6 pm containing various flowers beautifully mixed with red roses along with a big, tower size bouquet consisting of red roses and a hand written note which read:
“It’s been only a year and a half since we became One, sharing a roller coaster ride where the day just doesn’t pass by and night just doesn’t feel sufficient.
Brace yourself for another one such night where there will be moments of intimacy and the burning desire to Love; the moments which define WE.
I am expecting you at the City Palace restaurant at 8 pm tonight draped beautifully in a sari.
With Love, Tanay.”

At last she welcomed the big tower sized bouquet. Her face reading confusion, excitement and surprise all together. She just couldn’t understand what was happening. She saw the note attached to the bouquet and read it. Tears rolled down her eyes as she was reading the note. She thought to herself:
“There is no one that can stop us loving eachother more than before apart from death” She then quickly texted him “Waiting to see you my love, my eyes have became red and only you can make it beautiful by getting lost into it. See you at 8. Bye.” 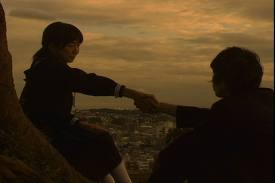 He, as before, didn’t reply though he wanted to. He completed his entire work and left office bit early so that he can reach on time. As he left his office premises and walked towards his car, he heard a loud explosion which made him flew 200 mts away and there he was lying in a pool of blood. Yes, it was a terrorist attack. A time bomb had been planted at the commercial complex where his office was located. He sustained severe head injuries and it was the last time he remembered her, visualized her before taking a ride to heaven.

Yes, many things were left to be explained to her, An Untold Storywas left to be told but unfortunately he couldn’t. Everything changed within and around her. Tanay was no more to Love her, to feel her, to caress her, to talk to her, to spend the life together. She was all alone with the only company of tears and loneliness.

The fellow Blog-a-Tonics who took part in this Blog-a-Ton and links to their respective posts can be checked here. To be part of the next edition, visit and start following Blog-a-Ton. Introduced By: None (Google), Participation Count: 01

I want a divorce